I don’t know if I could pick a single villain that outshines Thrawn when it comes to pure intrigue. Like many, some of the first novels I read when I found out that Star Wars had novels was the Heir to the Empire trilogy. And while I was totally on board with the Disney purchase and starting fresh with a new canon back in 2014, the one character I lamented losing was the Grand Admiral himself.

Then flash forward to 2016, when not only did Thrawn make a surprise entrance in the Rebels Season 3 trailer, but we got word of a brand new Thrawn novel with Timothy Zahn once again at the helm! I’ve never been floored by a trailer quite as much as I was for that one, not even when I heard Palpatine’s iconic cackle in the Rise of Skywalker trailer.

I’m very excited to talk about Thrawn this week, so I hope you’ll join me after the break!

This novel covers quite a few years, starting with Thrawn living a life of exile on an uncharted planet and covering his rise in power over the first portion of his career. But interspersed between these stages of his story are what I think of as Thrawn’s journal entries – his reflections on battle strategy which nicely tie in to what is happening or is soon to happen in the coming chapter. These segments are particularly intersting in the audiobook, where Marc Thompson once again brings Thrawn to life in ways not many others can.

To start us off, Thrawn is discovered on an uncharted planet by an Imperial scouting party. Among this party is cadet Eli Vanto, who is the only one in the crew that can speak Sy Bisti, and is the only one that recognizes Thrawn as Chiss. After en encounter with the leaders of Eli’s party, it’s decided that Thrawn will be taken to Coruscant.

After arriving on Coruscant, Eli is amazed to learn they’re heading straight for the Imperial Palace, where Thrawn is delivered to the Emperor himself. This is a wonderful scene where Thrawn convinces Palpatine that he should be part of his Imperial Navy. Thrawn wants this for the protection of his people, who Thrawn desires to protect even though they have cast him out. In return, Thrawn says he has information about the Unknown Regions that he is sure the Emperor would want (if alarm bells aren’t going off in your head, they should be). Eli is assigned to be Thrawn’s personal translator, a title that will haunt him for years to come as he views this as a sidetrack in his career that will send his life on a path he has little desire to follow.

Over the course of the next few years, Eli is proved correct. He is stuck in his role at Thrawn’s side, and is forced to watch Thrawn advance in both rank and career while he basically stays put. However, in each encounter Thrawn finds himself, Eli is learning more and more. He is undoubtedly learning from Thrawn. But Thrawn’s escapades and unorthodox tactics land them in hot water more often than not. While aboard their first assignment on the Blood Crow, Thrawn uses a rather unconventional plan and some of his buzz droids (since a passion of his is restoring Clone Wars era tech) to escape from a group of smugglers stealing Tibana gas. He and Vanto are both suspended from duty, but Thrawn is able to track down the Tibana gas and lead his Imperial friends to both the gas and the smugglers.

This whole encounter weaves itself into the rest of the story as well, as the Imperials are attempting to track down Nightswan, a smuggler that has given them problems for years and so far eluded capture. And Thrawn’s attempts to locate and capture Nightswan are a part of many of his adventures for a number of years, not culminating until the novel’s final act.

But while this is all happening, we also see another how another Rebels character rose to power. Arihnda Pryce starts off working at her parents’ mine on Lothal before being forced out by the local government. She has to move her parents off-world, and she decides to travel to Coruscant to work her way into the political scene with aspirations of returning to Lothal later, with more power and more sway to take back control on her homeworld. Along the way, she works with senators and is betrayed by senators, wheels and deals with Wilhuff Tarkin, and ends up forging an alliance with Thrawn himself. 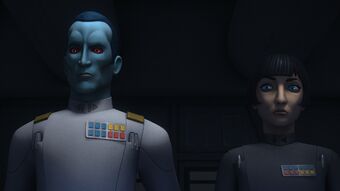 I know with these posts, I usually go further into spoiler territory, but honestly, I think I want to leave you here. This is one novel that I enjoyed so much that I would feel bad for giving you the whole thing in a thousand words or less.

But here’s what I want to say: overall, I loved this book. I loved seeing Thrawn again, loved the way Zahn works in some details of the Thrawn we remember from Legends, and love meeting with characters we see again in Rebels. And I also grew to love Eli Vanto. I think he complements Thrawn perfectly well. And while the first half of his story seems unfair and you really start to feel for him, I’ll just say it pays off for him in the end.

I can’t wait to talk Thrawn: Treason (the sequel to this novel) with you all in a couple weeks! But in the meantime, have you read Thrawn? If so, I very much want to hear what you thought of it. Let me know below!