It’s Monday which means one thing: time for a new entry in the Canon Catch-Up series! This week is filled with politics and handmaidens with attitude: we’re looking at Queen’s Shadow, by E.K. Johnston.

Queen’s Shadow was released on March 5, 2019 and tells the story of Padmé and her transition from Queen of Naboo to Senator of the Galactic Republic. But along the way, she is met with resistance and mortal peril that she must outlast and outwit with the help of her very capable cadre of guards and handmaidens.

If you’re ready to learn more about the events within Queen’s Shadow, hit the Read More link below. If you don’t, I’ll send a handmaiden after you. And you do *not* want that!

This novel is set about four years after the events of The Phantom Menace. We open with a very masterfully done scene on Naboo where Padmé and her handmaidens are enjoying a swim in the lake. What is really masterfully done though is Padmé’s introduction: she’s described as floating, her hands clasped across her stomach, looking peaceful and serene. It evokes images of her funeral procession we see in Revenge of the Sith, and we’ll actually return to this later.

But for now, she’s just swimming. This is an election day on Naboo, and a new queen is being elected. The handmaidens are all preparing to go their separate ways and do their separate things, no longer being bound by duty to Padmé.

Once the new queen is chosen, she approaches Padmé and asks her to serve as senator now that Palpatine has been serving as Chancellor and Naboo’s other senator is retiring. Of course, Padmé accepts. She chooses a new set of handmaidens, and accepts the help of some of her original handmaidens as well, most notably Sabé who serves as a body double for Padmé somewhat often. 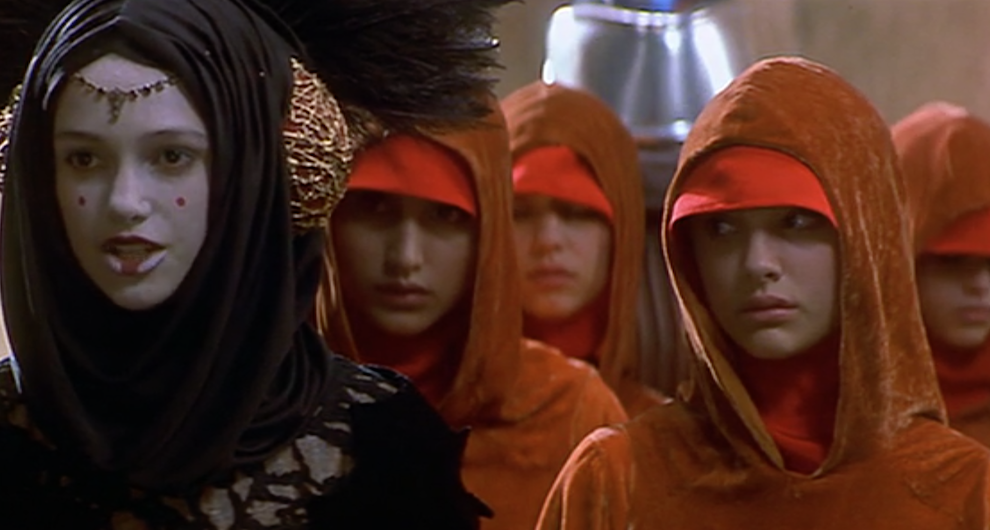 Padmé’s early days in the Senate are perilous to say the least. She survives an attempt on her life and numerous character assassination plots, presumably at the hands of the Trade Federation. Nute Gunray is still on trial for their actions on Naboo, and there’s obviously still animosity there.

Padmé has aspirations to combat slavery in the Galaxy, and she often focuses her attention on Tatooine, often remembering her encounter with a little slave boy there. She even asks Sabé to go there undercover and work to free slaves wihtout official Senate approval, a task which only sees very moderate success. Padmé is met with resistance in the Senate to combat these issues, even from Palpatine himself.

Padmé eventually meets up with a group of senators that become her go-to collaborators within the Senate: Rush Clovis, Bail Organa, Mon Mothma, and Mina Bonteri (who may have some nefarious motivations as Padmé overhears her talking with a mysterious stranger multiple times).

A large portion of the rest of the novel deals with an emergency situation on Bromlarch. After suffering a natural disaster, Bromlarch needs aid. They need food, permacrete, money, and relief in general. After Padmé accompanies a group to assess the damage, Bonteri presents the appeal for aid to the Senate which is promptly shut down. Padmé takes it on herself to build a cooperative agreement that helps not only Bromlarch but other Mid Rim planets as well. Her greater-good bill has the support to pass in the Senate, brining much needed relief to multiple planets.

The main part of the novel ends with Padmé facing the news that Nute Gunray has been acquitted of his crimes pending an appeal should Naboo wish to file one. Padmé is informed that Gunray has put a large price on her head, which is apparently a theme that will continue for years until we get to Attack of the Clones.

The Epilogue wraps up in much the same way as the Prologue, with the imagery of Padmé’s funeral. Except this time it’s for real. We see the funeral procession held on Naboo for their fallen senator and queen. Sabé, who returns to her home in Theed, resolves herself to discover the reasons behind Padmé’s death and Palpatine’s rise in power.

That gets you pretty much caught up on the novel. So what did I think of it?

I’ll start with the negative, so I can leave this article on a positive note. It’s far from my favorite Star Wars book. And fair warning, if you don’t enjoy the planetary politics of the prequels, this novel is pretty full of that. I actually don’t mind the political aspects of the prequels (honestly, I really enjoy it), but even this was a tad much for me.

I also had a very hard time deciding what the story was here. Padmé’s initial days on Coruscant start with an attempt on her life, so I became intrigued at that point. Maybe this would be kind of a “whodunnit” like some of Attack of the Clones. It wasn’t. Padme’s passion for ending slavery was a pretty major idea in the first third, maybe half, of the novel. I thought at that point, “Okay, she’s going to work to free slaves. Maybe that’s how Shmi Skywalker is able to be freed. I can get behind this.” It wasn’t. Then Bromlarch comes up and that becomes the main focus for the last third or so of the story.

It really comes down to this being a collection of events, none of which really come together enough to get me on board for very long.

All that being said, this is an excellent look at Padmé – her passion, her motivations, her family, her friends. And perhaps even more than Padmé, Queen’s Shadow is very much a closer look at the people around her. Her handmaidens are seriously badass (apologies for the language, but it’s really the best way to say it). They are entirely devoted to Padmé, and it’s mentioned more than once how they would be willing to lay down their lives for her. Not only that, but they are expertly battle trained, and can easily protect their Queen-turned-Senator with force if need be. They are incredibly capable, fierce, loyal – a true group to be reckoned with. I would be totally okay to see more of Sabé, especially on her crusade to uncover the truth she sets out to find at the end.

E.K. Johnston is set to follow up Queen’s Shadow with Queen’s Peril, a brand new novel releasing this June that appears to be focusing on Padmé’s time on Naboo.

Did you read Queen’s Shadow? What did you think of it? Let me know in the comments below!