Like a lot of other people, I have been working my way through a re-watch of Clone Wars. Season 7 is coming in only a few short weeks, and honestly it’s been a few years since I watched this series from start to finish.

Clone Wars is filled with wonderful episodes, some of which expanded the lore in pretty big ways. Tonight as I’m watching one of my favorite episodes again, I thought it would be a perfect chance to take a closer look at it on the blog.

So, let’s jump into “The Gathering” together.

If you follow our page on Twitter (and if you don’t, you should click here), you’ve probably seen that I’ve been having fun posting some of the quotes that appear at the beginning of each episode. This is one of those quotes that I couldn’t resist tweeting.

“He who faces himself, finds himself.”

As we’ll see in this episode, that quote very heavily applies to our group of Padawans and the trials they face. But before that, we have some setup to talk about.

A Gathering is one of the steps in a Padawan’s learning. Our opening montage and narration tells us a bit about the early life of a Padawan, that they discover the Jedi are their true family and that they face years of rigorous trials and tests. And then we learn that the greatest of these is the Gathering:

“But none is as important as the Gathering. It is then that a Jedi’s path will truly begin.”

Interestingly, as the opening montage also gives us a look at a very young Ahsoka as she is being discovered by Plo Koon. But the episode itself begins with our group of Padawans gathering around Ahsoka who has assumed more of a teaching role with these younglings. The student is becoming the teacher, and she will keep this role throughout the rest of the episode (the rest of the arc, actually, as the following couple episodes deal with the events after the Gathering). 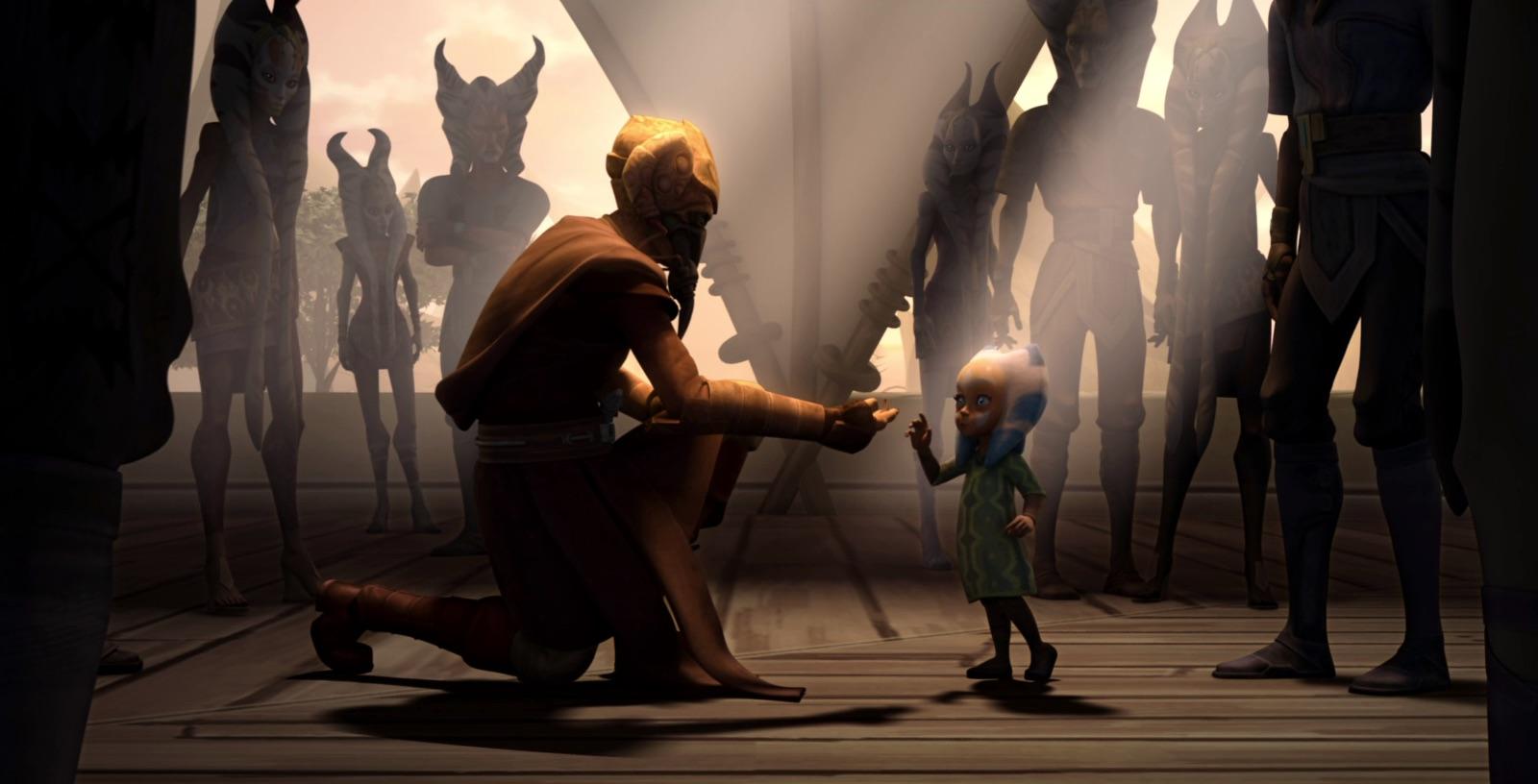 Ahsoka informs the younglings that they are embarking on their journey to construct their own lightsabers, which of course garners a hearty set of cheers from the excitable younglings. They travel to Ilum, a planet that will become pivotal in later stories.

Once Ahsoka and the younglings make it inside the Jedi Temple, they meet with Yoda who is waiting for them. He gives them more details on their task here, which is to find and harvest their kyber crystals.

“The heart of the lightsaber, the crystal is. Focuses the Force from the Jedi, it does.”

Yoda warns the younglings that they must trust themselves and trust the others to succeed. They must enter the crystal cave to accomplish this. Ashoka adds that once they find their crystal, they must exit the cave immediately or risk being trapped behind a wall of ice for an entire cycle, which lasts 19 days. As they enter the cave, we already see a schism forming within the group because Petro (one of the younglings) separates himself from the group in order to find his crystal first.

While Petro erroneously thinks he has found his crystal (which turns out to be nothing more than ice), the rest of the group must pass tests to reach their own crystals. Katooni, a female Tholothian, spots hers high on a cliff that she must scale to reach. Gungi, a young Wookie, must wait for a lake to freeze over in order to obtain his. Ganodi, a Rodian, must discern which is hers in a cave filled with crystals. Zatt, a Nautolan that relies heavily on technology, has to trust himself to get where he needs to be. And Byph, a male Ithorian, must find his courage in order to snag his crystal.

But if you’re keeping track at home, that still leaves Petro without a crystal. And indeed, his story comes down to the final moments of the episode. Katooni, on her way back, falls and becomes trapped behind a wall of ice. Petro, becoming increasingly desparate, stumbles across her but refuses to spend the time to help her since he still must find his own crystal.

As he’s walking away, though, he has a change of heart. He returns to Katooni, and using a Force push from both sides of the ice that has her trapped, they are able to break down the wall. Petro sends Katooni back to the main chamber where the others wait so she can escape in time. Having passed his own test, Petro finds that his crystal was behind the same wall that had entrapped Katooni.

Back in the main chamber of the Temple, though, the ice wall has completed its freeze and shuts Petro inside the crystal cave. Yoda tells Katooni, who barely made it back in time, to trust her friend Petro. And indeed, within seconds Petro comes crashing through the ice wall, crystal in hand.

To end the episode, Yoda explains that the wall is only made of frozen water, and is easy enough to break if one has the will. The true test was actually what they faced inside the cave: mastering their courage, hope, patience, trust, confidence, and selflessness.

I love this episode. It’s one that would be designated as “filler” nowadays – but the mythology and lessons we encounter here are executed to perfection. Learning more about how a lightsaber works, how it’s constructed, how Padawans complete that journey – it all combines into one of the deepest episodes of the entire series. Not to mention, this episode is the first time both Ilum and kyber crystals are mentioned.

“The Gathering” is easily one of my favorite episodes in the Clone Wars. If you’ve never seen it or if you’re itching to watch it again, you can find it in Season 5, episode 6. Of course, as with the rest of the series, it’s all available on Disney+!

What do you think about “The Gathering?” Is it one of your favorites also, or is it an episode you can do without? Let me know! And be on the lookout for some more Clone Wars content coming your way on From a Certain Point of View. We’ve got some fun things in the works leading up to the start of Season 7 on February 21.