So this post is kind of meta. Almost like I’m naming a movie after an already established piece of well-known music. But that’s another can of worms.

This week’s Canon Catch-Up is From a Certain Point of View. And aside from being one of the namesakes that inspired us to start our website and podcast, this title pretty much encapsulates what this novel is: a collection of short stories that all revolve around characters involved in A New Hope – some more than others.

If you’re ready to find out all about this special collection, hit that “Read More” button below!

Released on October 3, 2017, From a Certain Point of View was released to commemorate that 40th anniversary of Star Wars hitting theaters. And as such, this was a collection of 40 short stories that all give you new perspectives on the events of A New Hope.

The list of authors here is impressive to say the least. I’m tempted to list them all, but that’s 43 names so I’ll just tell you to hit this link and check out the list. If you’ve read Star Wars novels prior to this, chances are you’ll recognize some names. Actually, if you’re a sci-fi fan in general, you’ll recognize some names (*cough* Wil Wheaton *cough*). And the list of featured characters is equally as impressive.

I want to jump right in here and give my mini review before I get into some of the details of this book. It certainly has its highs and lows for me, which I guess would be mostly expected given this is a short story collection. Some stories I gravitated towards, some I didn’t. One of the reasons for that is that the characters in some of these stories just don’t click for me. Which, again, I think is expected. But when it hits high points, it really hits high points.

Just to give you an example of what I mean by the lower points, there’s an entire story (“The Baptist”) about a character named Omi. If you’re not familiar (which you wouldn’t be because as far as I know, this character didn’t have a name until this story), Omi is the dianoga that Luke, Han, and Leia encounter in the Death Star garbage disposal. If you’re still not familiar, here’s Omi: 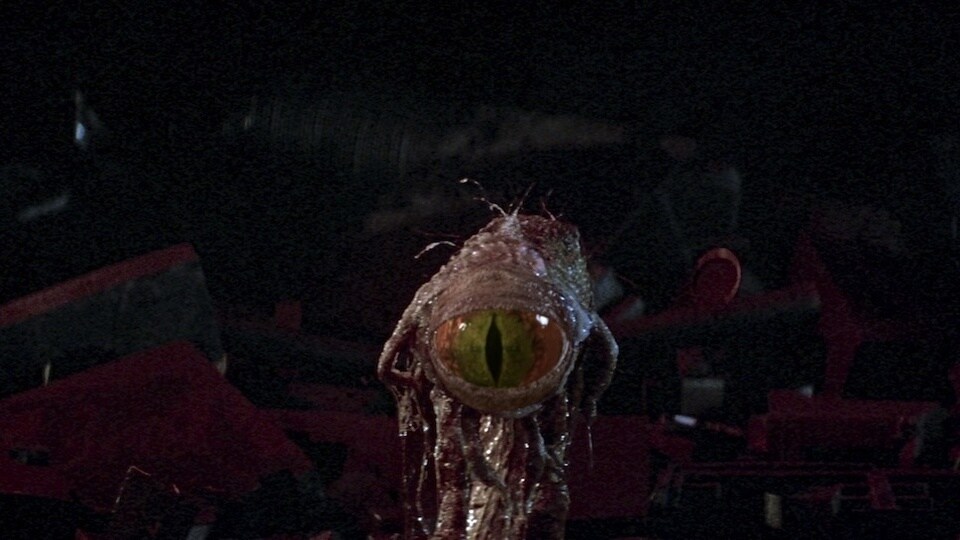 Yep. The character that pulled Luke into the garbage water (a scene that still skeeves me out, since I’m admittedly a bit of a hypochondriac) now has a backstory. Keep in mind, it’s not poorly written, and I don’t have a problem with the story. I don’t have a problem with any of the stories here. It just doesn’t grab me. I didn’t care much for Omi’s backstory prior to From a Certain Point of View, and I don’t care much for it afterwards either.

But aside from this story and a few other like it, there are some stories I absolutely adore in this collection. Far and away the one that stands out for me is “Master and Apprentice” by Claudia Gray. The title in itself is interesting, as we’re going to be catching up on another full novel of the same name from the same author. But I think that’s for a reason, and we’ll talk about it when we get to that novel in Canon Catch-Up.

Anyway, “Master and Apprentice” tells the story of Qui-Gon Jinn (!!!) appearing as a Force ghost to his former apprentice, Obi-Wan Kenobi. This story takes place during the time that Luke has left Ben to check on his aunt and uncle after learning the stormtroopers are looking for their droids.

This is a story ultimately about failure and growing beyond that failure, one of those themes we keep seeing come up in Star Wars. Kenobi is dealing with those that he has failed in the past (even Satine Kryze gets a mention), and Qui-Gon confesses his own failures. Kenobi is struggling with his choice to hide the true story of his father, and Qui-Gon reassures him that waiting until he is ready was the better path.

There’s just some beautiful moments in this story, and some very interesting details about Force ghosts in general. If you get the chance to listen to the audiobook version of this, PLEASE DO. It’s performed by Jonathan Davis, who just nails the performance of both of these characters.

I also quite enjoyed “There is Another”, which as you might expect is centered around Yoda while he’s in exile on Dagobah. Gary D. Schmidt did something quite interesting incorporating a character that wasn’t even in A New Hope, which actually happens in a few other stories as well. Like “Master and Apprentice”, this story use a Force ghost to communicate with a living character but this time it’s Obi-Wan as the ghost and Yoda still living.

I think the thing that struck me most in this story was that Obi-Wan takes a moment to advise Yoda he’s sending the young Skywalker to him for training. Yoda is initially quite receptive, but only because Yoda thinks Kenobi is referring to Leia, whom Yoda says he has been excited to train. His attitude quickly sours, though, when he finds out that Luke is the one on his way to the aging Jedi Master. It’s a great moment of levity in picking up that thread from Episode V, but also a great moment of enlightenment knowing how Yoda feels about Leia.

I can honestly say I very much enjoyed my time with From a Certain Point of View. I can easily see myself picking this one back up in the future – if not to read it all again then just to read or listen to some of my favorites. And since they’re mostly short stories, it’s easy to pick up and read one or two at a time. If you’re looking for something to give you a Star Wars fix on your morning commute or a lunch break or just when you don’t feel like spending hours reading, this might be for you. It gives you a complete story with each chapter.

If you decide to check it out, be sure to check back here and let me know what you think!